Register for a place

Saturday 28th April saw over 100 members of Girlguiding Glasgow decent on Achachairdeis to celebrate 50 years of Napier House, the biggest of the onsite accommodation.

Originally built to be used by the Brownies of the county, hundreds of girls & their leaders have made many happy memories on holidays spent at Napier. Former Brownies joined with current members of our largest section to take part in activities from yesteryear, outdoor challenges and crafts.

The events started with a welcome from Jill Elborn, county commissioner, who thanked those involved in organising the day & keep Napier House running so smoothly. Particular thanks was given to Isobel McGregor who has been the bookings secretary since Napier House opened. She cut a cake specially decorated for the occasion alongside a Brownie whose 11th birthday was a few days away. Once the formalities has been completed, the fun began!

The girls worked in small groups to find clues around the site to solve a riddle, had a go at some traditional fairground games, took part in competitive games and decorated a photo frame that housed a photo of their group to take home as a moment of the day.

Anne & Isobel, former Pack Holiday advisers, reminisced about all the experiences they’d had with their groups – singing brownie songs & the girls having midnight feasts, watching brownies seeing the countryside for the first time (including the cows that used to spend time on our fields) & the parents days at the campsite which gave the girls the change to show off all that they’d been up to.

Many Thanks to the event team for their time in arranging the day & all those who gave up their Saturday to help. 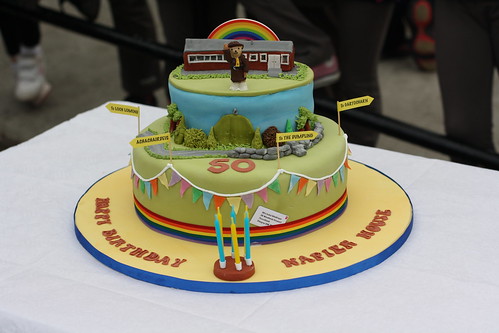 Napier House sleeps 18 girls in dormitory accommodation plus up to 6 adults/young leaders across 2 separate bedrooms. Their are facilities for those with additional needs and a recently upgraded kitchen plus activity hall/dinner room. For availability, please see our availability calendar here

← Previous Next →
Back to the top